Back To The Future Hoverboard set for Christmas release 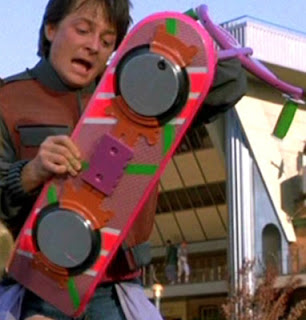 GOOD NEWS, Mattel are releasing the hoverboard from Back To The Future 2.
BAD NEWS, It doesn't hover (it glides.)
The release was announced at the New York Toy Fair last weekend and there will be a limited pre-order for the item next month, reports Slash Film. However, the item will only go into production if enough pre-orders are made, because of costing.  The press release reports "We’ll be taking orders for it March 1 – March 20, 2012, and the final product will be shipped around November/December 2012. Because this is such a high-cost item, there will be a minimum number of orders required to go into production. If we don't receive the minimum orders, won't go into production and customers will not be charged. The price will be announced later this month."

Pah!  I'm not interested (actually I am) until I get  one with power.  I mean I live in Wales so how else am I going to use it across all these puddles?


Here's the Hoverboard bit from the movie.