By welshslider January 17, 2012
Box office-wise, the surprise winner of the holiday season was “War Horse,” Steven Spielberg’s military epic. With an absence of recognizable stars -– save perhaps, for the horse -– the film’s appeal is in the very filmmaking: Mr. Spielberg’s own style, of course, and that of frequent collaborators like the Oscar-winning cinematographer Janusz Kaminski and the sound designer Gary Rydstrom, who has won Oscars for “Saving Private Ryan,” “Titanic,” “Jurassic Park” and more.In his long career Mr. Rydstrom has worked on “Indiana Jones and the Temple of Doom,” “Terminator 2” and “Spaceballs.” But he had never done a World War I movie, and, sonically, the prospect excited him.
“World War I has a specific sound to it,” he said. “I thought the tanks and the guns should sound more primitive, unrefined. In World War II, the guns weren’t as clattery, the artillery didn’t make as much of a whistle when they came in, the tanks probably had more oil in them. The movie is about the historical clash when the old ways of war met the new ways -– cavalry vs. machine guns.” 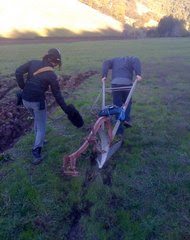 Skywalker SoundThe sound crew actually plowed land (Skywalker Ranch, in this case) for the farming scenes in “War Horse.”
He did research but, he said, “there aren’t too many people around who remember what World War I sounded like.” For Mr. Rydstrom this proved extra-delectable because he got to make it up. “You are always going to hear a lot more than you’re going to see if you’re in the middle of the battle, and when I talk to people who have been in the middle of battle, a lot of their memories were about the sounds of war,” he told the Bagger in a recent phone interview from his office at Skywalker Studios in California. “For this movie, I tried to imagine what the iconic sounds of war would be, from the horse’s point of view or soldier’s point of view.”
Among the instruments he used to recreate these sounds: swarms of bees, ice skates, copper bowls, gallon water bottles and a vacuum cleaner.

“What I usually do, out of laziness, is I do a lot of my recording around my house,” he said. “The golden rule of sound design is, it doesn’t matter what a sound really it is, it matters how it works in the movie, how it makes you feel. It doesn’t matter that it’s a vacuum cleaner.”
Of course, there are moments of realism. The sound for a pivotal early scene in the movie involved actually plowing Skywalker Ranch (it sits on 5,000 acres in Marin County), using a borrowed old-fashioned plow and two plowhorses. “The moment of success, the plow dipping on the dirt, there’s now this smooth yet heavy and extremely satisfying sound, that was a wonderful day that we spent recording plowing on every possibly angle,” Mr. Rydstrom said. But they also needed the sound of a plow stalling. So they pulled it themselves.
“I just want to point out how dedicated the sound crew was,” Mr. Rydstrom said.
Here, a glossary of other effects in the distinctive soundscape in “War Horse.”
Bullet whizzing by: The “bullet-by” is what sound guys call it, Mr. Rydstrom said, and for that effect he went Winter Olympics: “If you do quick turns in ice skating or skiing, you get that ripping sound,” he said. “We extract those and maybe do a little Doppler effect on them.”
Bullet-by of artillery missiles: “We used a string bow across a copper bowl to make these weird metallic sounds,” Mr. Rydstrom said. “I was in a weird artillery missile frame of mind. There is a classic artillery whistle that we did put in, but Spielberg is such a connoisseur of classic movie sound, there’s a classic artillery whistle that he remembered from ‘Paths of Glory’ that we had to emulate.”
Horse stampede in a cavalry scene: “There’s such a rumble on a mass of cavalry, it’s hard to record literally that. The first thing you do is record things like horses on racetracks. We’d put recorders on jockeys – there’s a local racetrack here in the East Bay that’s sort of horses with carts. You could go in the pace car or something, you could get a real straight-on recording of a group of horses galloping. We also recorded cattle being moved. For the really low end, we can use deep, almost rumbly explosive stuff – I’ve had a sound for years of glaciers breaking apart. It was useful as horses galloping and as a distant artillery sound.”
Incoming shell: “That’s one of the scariest sounds in war to me, knowing that a shell is coming in to explode near you. I recorded my vacuum cleaner. I was vacuuming my stairs and if you vacuum in the crack of the stairs in the carpet, it makes this crazy whoosh. This happens to sound people all time, you’re doing something mundane one day and you hear this great sound. My wife has long thought I’m crazy; she probably had to be quiet for a few hours while I recorded a vacuum cleaner. The cracks of my stairs are so clean now.”
The star horses, Joey and Topthorn: “Our first instinct as a sound man is, if I just take a walrus and an otter, and speed them up, it’ll make a great Joey vocal! Spielberg tried to warn against that. He wanted the horses to sound like horses. [So no otters or walruses were used.] We recorded many, many horses to find the voice for Joey. My favorite was miniature horses. They sound different, they have a different emotional range – they’re a little closer to dogs. We have to make a library of different horse vocals and start categorizing them into different emotions. We had to record horses in veterinary hospitals that were sick or coming out of anesthesia. My wife has a horse, her horse makes this weird teeth grind, we used it all through the movie. I use it as a tender friendly sound between Joey and Albert,” the boy played by Jeremy Irvine.
The sound editor Teresa Eckton specializes in creature vocals, Mr. Rydstrom continued. “She cut Chewbacca. She and I would look at a scene and we would talk about it as if working with an actor or working with an animator. So we would talk about what was going on in the horse’s mind. It’s like ‘Inside the Actor’s Studio’ – what is the horse’s goal? You need action verbs to describe what the horse is going through. It was good to decide separately Joey and Topthorn, where their minds were at. We started to build piece by piece, breath by breath, to make a horse vocal come alive. It was the most intricate and difficult thing to do, to make the horses believable and have character.”
Tanks: “I have the old-fashioned push mower with no engine. I’m mowing the lawn and I hear this clattery thing – you slow that down and record it really close, it’s perfect for a tank.”
Trenches: “Trenches for World War I are key. I tried to find the claustrophobic sound of being in a trench. If you take one of those big water bottles and you blow over the top of it, and you loop it and you slow it down, it makes this steady howl. So we used that. Again, the sounds of your household can be immensely satisfying.”
For those wondering how Mr. Rydstrom got his start, he said he went to film school: “The fundamental irony of my career is that I got interested in film because I loved silent film.”