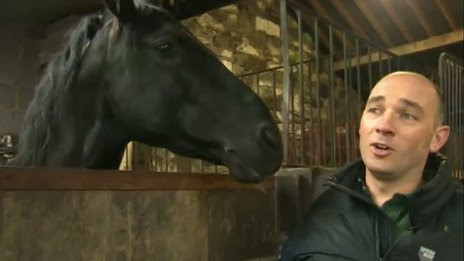 A horse trainer from Gwynedd has enjoyed seeing himself on screen in a wartime blockbuster that is delighting moviegoers around the world.
Dylan Jones, from Llanberis, was a stunt horse rider and team co-ordinator on Steven Spielberg's epic War Horse.
He spent seven weeks working on locations including the Duke of Wellington's estate near Basingstoke.
Mr Jones has also worked on the BBC TV drama series Merlin, and an earlier US TV mini-series of the same name.
Based on the Michael Morpurgo novel, War Horse is a tale of friendship between a young man and a horse which is sold to the British cavalry and dispatched to the front line at the outbreak of World War One.
The film has been nominated for six Oscars including Best Picture.

As well as appearing in the film, Mr Jones supplied 15 horses for the shoot through his company Dolbadarn Film Horses, which his father Aneuryn set up in the 1970s.
The horseman originally trained as an actor and spotted an opportunity when he was invited to ride a horse in a US TV mini-series about Merlin, starring Sam Neill and filmed on Anglesey.
"There was nobody professional training horses for the TV and film industry in Wales… so I saw a niche in the market and went on from there," said Mr Jones.
Since then, he has worked on several TV and movie projects, including the BBC Wales series Merlin, supplying horses for the characters of Merlin and King Arthur.
Steven Spielberg Mr Jones was invited to take part in War Horse, filmed over the summer of 2010, by the main horsemaster who he had worked with on director Ridley Scott's Robin Hood film.
"It was an eye opener for us because they were hard, long days, but it was well worth doing," he said.
"Steven Spielberg was on set all day every day - he was a lovely guy to work with, nice and quiet, he knew exactly what he needed." 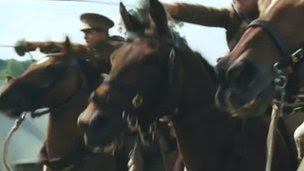 The movie tells the story of a friendship between a man and a horse which is sent to the front line
One of his favourite horses, Diablo, appeared with him in War Horse, but Mr Jones says only certain animals are suitable.
"Not every horse can be trained - they have to have a unique character," he says.
"There's no point even thinking about using a nervous horse - you need one that has a bit of fight in it."
Mr Jones was pleased with the results when he saw the film last week.
"I saw myself quite a few times - first I was a British cavalryman, then I saw myself as a German soldier," he said.
"It was a big production - I knew [the horse scenes] were going to be good because of the amount of hard work that we'd put into it."
"It was a great experience but since then we've been working on other productions… Wrath of the Titans, Snow White and the Huntsmen, and more of Merlin.
"You're only as good as the last job you did."