Getting Spielberg's War Horse ready for his close-up

By welshslider January 22, 2012
The equine artistic adviser on Steven Spielberg's War Horse film talks about her work with the movie's four-legged stars.
No film set is complete without the diligent hair and make-up personnel who take pains to ensure the actors are ready for their close-ups.
On Steven Spielberg's War Horse, though, it was not just the human cast members who were groomed for the camera.
With no fewer than 14 different animals sharing the role of "hero" horse Joey, the team to which "equine artistic adviser" Ali Bannister belonged had their work cut out.
That number was further swelled by the hundreds of other beasts that were required to bring this epic adaptation of Michael Morpurgo's 1982 novel to the screen.
"Equine hair and make-up normally gets a laugh," says Bannister, a UK artist whose drawings of Joey are featured in the film. "It sounds such a comic title."
In her own words: "We are the people with the really big animals and the really tiny brushes."
It was Bannister's job to ensure the distinctive, cross-like white marking on Joey's forehead remained consistent, regardless of which horse was playing him.
"We also had to have artificial hair-pieces made up, to show all of Joey's different ages," she adds. 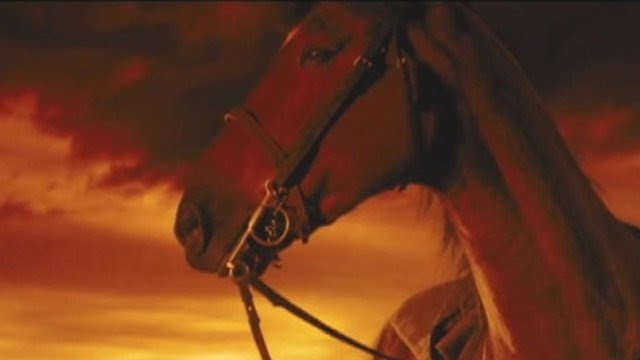 Tom Brook reports from the film's New York premiere
More often than not, though, her most familiar accessories while out on location in Dartmoor were pots of specially designed mud, used to make the film's elaborate World War I battle scenes look authentically filthy.
"Real mud tends to look grey on camera, so we would have to mix up large quantities of pigment, mud and a Vaseline-like product," she explains.
"Eventually, through testing, we narrowed it down to three different shades.
"We would start at 5am with mining lamps on our heads, distressing the horses with mud and ash," she continues.
"In some scenes we might have up to 80 horses, so it would be like a factory line."
So how did the animals cope with the constant attention?

"There were 14 horses playing Joey and they would all have their good days and bad days.
"Some of the horses were like teenagers - they'd be fine for a while but then would start to whinge.
"But others we thought would be less patient would just stand there like saints. One horse was so relaxed, he tried to go to sleep."
Chaos and carnage
Following the relationship of a Devon farm lad and his beloved steed as they are caught up in the Great War's chaos and carnage, War Horse finds Spielberg working on a large and spectacular canvas.
Bannister, though, admits her close relationship with the horses means she has yet to give in totally to the Oscar-nominated director's assured storytelling.
"I can't switch off while I'm watching the film," she laughs. "I'm like, 'JJ! Abraham! Roger! Finder!'
"They're all so different that you have to elbow me in the ribs to stop me shouting their names out." 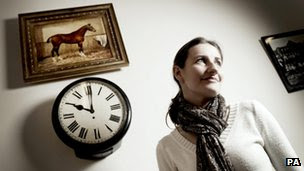 Bannister has since painted a picture of 'Joey' that now hangs in a village hall in Devon
Yet Bannister has one more connection to the War Horse story that will have an ongoing relevance to fans of Morpurgo's novel.
The author asked her to produce a real version of the fictional horse painting referred to in the book's opening pages.
"I had never painted in oils before but I was too excited to tell him," reveals the artist, whose work now hangs proudly in the village hall of Iddesleigh in Devon.
"Ali Bannister did this wonderful picture of Joey and she was there to see it unveiled," says Morpurgo, whose novel inspired a hit stage show prior to its current incarnation.
"It is exactly how it is described in the book, so it is now a completely convincing lie."
War Horse is out in the UK on 13 January.