When Darth Vader stormed into a Ukrainian mayor's office demanding somewhere to park his spacecraft, the authorities needed a dramatic solution.
The Star Wars villain cited the country's new legislation that every citizen has the right to claim 1,000 square metres of land.
His invasion came after the city of Odessa agreed to grant attractive plots along the Black Sea coast to a group of people, prompting local concerns over corruption.

SCROLL DOWN FOR VIDEO 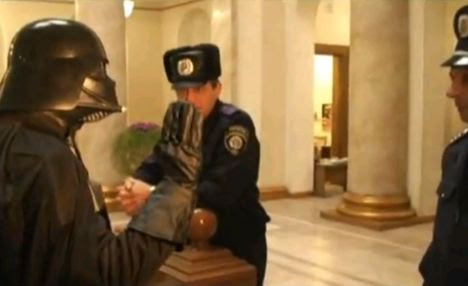 Striking back: Darth Vader states his claim for a free plot of land to bemused guards 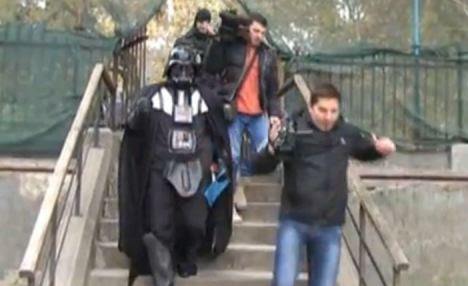 Phantom Menaces: The evil visitor heads to his destination accompanied by cameramen
The mayor's office has since said the agreement was a mistake but has not yet cancelled it, according to local news website Dumskaya.net.
The costumed city dweller told two guards through a voice distorter in his black helmet.
He said: 'I am Darth Vader, the right hand of Emperor Palpatine.'
He added: 'Knowing that many [local legislature] deputies and the mayor have switched to the dark side…
'I have come for a land plot… for my space cruiser.' 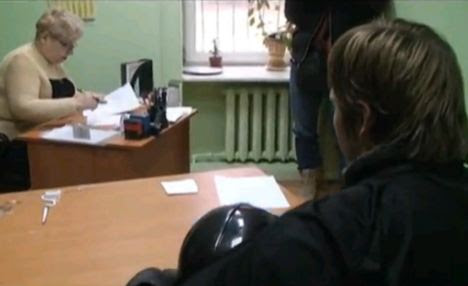 Action stations: The unmasked crusader is handed a form by an official in Odessa 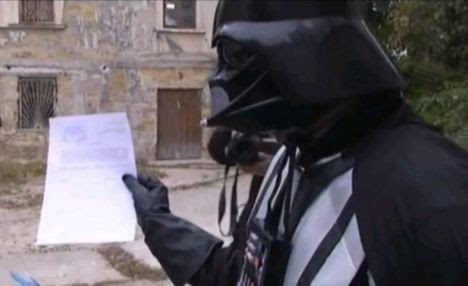 Mission accomplished: Darth Vader holds an old-fashioned piece of paperwork after registering for the scheme 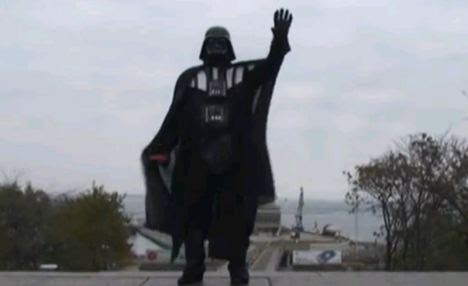 Dark arts: The masked intruder salutes his YouTube followers
The amused officials accepted the man's application after he showed his passport and removed the helmet.
The video shows police leading him from the building to another location, where a woman hands over a form to the caped but unmasked anti-hero - although the film shows only the back of his head.
A video of his escapades on YouTube was accompanied by the Imperial March music, composed for the Star Wars films by composer John Williams.
'The application has been registered and will be considered,' said a spokeswoman for the mayor's office.
'We are not on the dark side, we are light-side people.'
WATCH THE VIDEO