Spielberg was my film-school: Kathleen Kennedy

By welshslider November 26, 2011
As ""The Adventures of Tintin: The Secret of the Unicorn"" open to theatres across India, we got talking with Steven Spielberg's right-hand man, or shall we say - his right hand-woman, ""Tintin""'s executive producer, Kathleen Kennedy.
She calls herself Spielberg's translator. ""It is my job to translate Steven's vision to the hundreds of people who work for him, she says. Although, Steven adds, ""She's a bit more than that."" And that she is. Kennedy's the second-most successful film producer of all time and she has been by Spielberg's side through all of his biggest hits, including Indiana Jones, ET and Jurassic Park. In Brussels to promote Tintin, she provided us with an insightful interview on the making of Tintin and what the movie means to India. 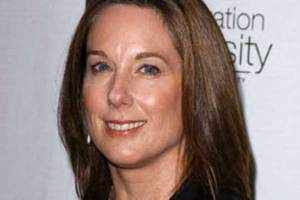 How did you start working with Steven Spielberg?
I started working with Steven Spielberg when I was 26-year-old and I interviewed for a job that was actually with John Miller. I got the job. Steven and John worked in the building together, I got to know Steven while we were making 1941, and he just increasingly was asking me to do projects and what not, and then he asked me to come and work directly for him. Things were quite different back then because, he didn't really have anyone else working for him so it was quite a different opportunity. He was sort of a film school.

How does it feel to be the woman behind Steven Spielberg?
I consider myself incredibly fortunate. I think Steven works very well with women, I think he feels comfortable with women. I think women handle ego very differently, you know. I certainly like to have my opinions, I have my point of view but I am not in competition with him. That seems to be the male dynamic and I think that's why Steven feels comfortable having women in his life. The many times I go into his office, and between his wife and his two assistants, and me and Stacy from the company - there will be 6 women standing around him at any given point (laughs) and he is fine with it.

While making Tintin, did you target the India market in particular?
Yes, we did. When we had looked at the research and realised that Tintin was so popular in India, we were surprised - we had no idea and so when we sat down in front of the film's distributors, it was very very important market for Tintin. It's just too bad that we don't have the time to get on to an airplane and go. I have done that in the early days with my husband. It's one of my fondest memories. Back then we were scouting locations for"Raider's" and we went to Jaipur, Udaipur area. While I've had the opportunity to go around the world for publicity, Steven hasn't had the chance to do that for a long time because he is always making a movie while we are selling the new one.

The American and European audience have very different sensibilities, especially when it comes to humour, did you have to keep that in mind while making Tintin?
We did keep that in mind, but I think that is a very difficult thing to change. If you start moving away from what you intuition is, being creative, and start guessing what you think people might want or be interested in - I don't think you will do a very good job, I think all you can do is rely on your own instincts and then hope those are shared by as many other people as possible, when you are making a movie. So if you're trying to make a movie at is populist entertainment, I think that is what Steven does exeptionally well. He has really good instincts for that. It's keeping the audience in mind, but he's never forgetting what he thinks. And I think that's a great part of the process.
I think this is going to be an interesting experiment actually to see the movie coming out in Europe so far in advance of United States, whether it ends up making a difference or not. I hope it does. There are many many movies that get released in the United States and everywhere else where the audience doesn't know anything about it. There's not a book, there's no awareness. I would certainly hope, that with Steven having directed, I hope the audience will know that they will get a really really fun movie.

The book is not so famous in America, and in places like Europe it is the older age group that has been reading the books rather than the younger lot, what kind of an audience were you targeting while making the movie?
We always said we wanted to make a PG- 13 movie. What's fun is that there is whole new generation that can be introduced to Tintin and can read the books and see the movies. And I know when I gave my kids Tintin, they loved them. Otherwise, had I not been making the movie, I wouldn't have known anything about Tintin. So, I think that will be nice for the audience that don't know much about it.