By welshslider October 25, 2011
Filming a scene for Revenge Of The Sith, one of the Star Wars movies, actor Anthony Daniels found himself in an embarrassing position.
As C-3PO, the endearing robot and loyal friend to Luke Skywalker, he was dressed in a skintight gold bodysuit and mask when he suddenly realised he needed his reading glasses.
‘My outfit was made from metal moulded to fit my body, with two dots in the mask to see through — there was no room for spectacles,’ says Anthony, 65, one of the few cast members to have starred in all six Star Wars films. 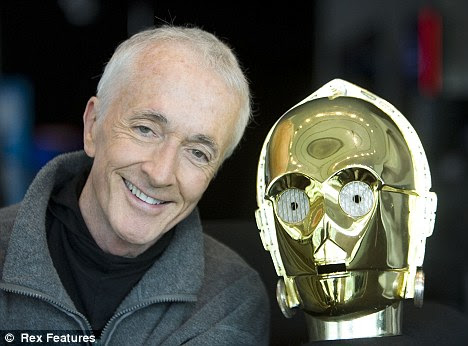 Perfect vision: Anthony Daniels couldn't wear glasses when playing Star Wars robot C-3PO so had laser eye surgery
‘I had a crew member standing in front of me holding up my lines, but without my glasses I couldn’t see things close up. I had to ask them to stand farther and farther back to try to enable me to see them in focus. I felt daft.’
Like almost everyone over the age of 40, Anthony suffers from presbyopia — an age-related blurring of close vision caused when the lens of the eye becomes less elastic. This means you find it more difficult to zoom vision in and out and hard to see things up close.

Everyone will be affected to some extent, but until ten years ago there was no alternative, apart from reading glasses. Anthony, who lives in London with his partner Christine, was diagnosed with presbyopia at 40. Though he started using reading glasses, his sight caused him real problems with film work and his public appearances at Star Wars conventions.
‘I needed my glasses pretty much all the time, but rarely wore them in public because I began to feel self-conscious about them,’ he says.
Over the past decade, laser techniques have been developed to compensate for the focus problems associated with presbyopia. While lasers can’t treat the lens, they are used to change the shape of the eyes, which tricks the brain to allow you to read normally.
Until recently, this was done through a technique called mono vision. The weaker eye is made slightly short-sighted by flattening the cornea (the clear dome-shaped bit at the front of the eye). This eye can then do the close reading work while the other eye is left untreated to do the distance work.
‘There is always an optical trade-off with this kind of procedure,’ says Professor David Gartry of the Royal College of Ophthalmologists and a consultant surgeon at the Moorfields Eye Hospital, London.
‘You can see at distance and up close, but there will be a difference in the intermediate range of vision — the picture on a nearby wall may not look as sharp as it was, for example.’
However, Anthony underwent a newer form of laser surgery for presbyopia called Laser Blended Vision, which treats both eyes. 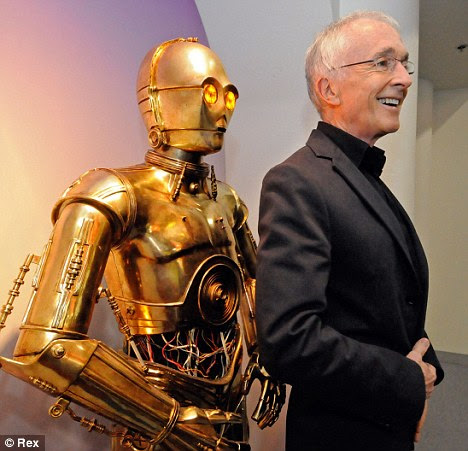 Ditched the glasses: Anthony felt self-conscious wearing his specs
It takes just eight minutes and, according to the designers of the system, leaves no gap between long distance and short distance vision. They claim patients achieve 20/20 vision in 97 per cent of cases.
A laser is used to open up a flap across the front of the eye and is then used to alter the shape of the cornea.
‘We work on the non-dominant eye to make it slightly better at near work, while still good at distance,’ says Professor Dan Reinstein of the London Vision clinic, who developed the original version of the process in 2005.
‘We also adapt the dominant eye to be excellent at distance and good at near work. Where it differs from mono vision and other laser eye surgery is that the focusing power of the whole cornea is taken into account when altering its shape, not just the central point.
‘With mono vision, the eye that does the reading looks after things from 20cm to 50cm, while the eye that does the distance sees from about three metres to infinity — but neither eye sees in the mid-distance of between 50cm away and three metres.
‘With the newest version of Laser Blended Vision, people see from 25cm to two metres in the reading eye and from 75cm to infinity in the distance eye. It means you can see near and far, and everything is in focus.’
But the newer method is not suitable for everyone. ‘In 3 per cent of people, the brain will not make the two eyes work in synch, and so the quality of vision is not correct,’ says Professor Reinstein. ‘But we pick this up beforehand by running tests.’

'The difference in my eyesight is nothing short of miraculous. I wish I'd had this done years earlier'
The procedure is also not suitable for people with thinner corneas.
‘There may be small fluctuations in clarity of vision from day to day after the procedure, but these usually settle within two or three weeks,’ he says.
There is also a risk of developing dry eye, and it can take time for the brain to adapt to learn how to ‘blend’ the two eyes. ‘These symptoms improve over a few months,’ says Professor Reinstein.
Anthony had the procedure two years ago after a frustrating time at a live stage event at the O2 Arena in London. He was narrating the Star Wars story with music from the films.
‘It was a two-hour show and there were a lot of lines — and as you get older, lines get harder to learn,’ he says.
‘So at every break, I would dash off the stage, put on my glasses and re-read the script. I had to have glasses on both sides of the stage, and every time I took them off my make-up smudged. I thought: “This is silly.” ’
Encouraged by Christine, who’d had laser surgery, Anthony decided to have the treatment. ‘It didn’t hurt, though I did see wonderful spirograph patterns. It was over in four minutes and then they did the next eye,’ he says.
‘I noticed a difference instantly. I could suddenly see small-print on signs on the wall. I had to wear dark glasses for the first day, and for a week I had see-through hoods to put over my eyes in bed so I didn’t roll over and damage them.
‘The difference in my eyesight is nothing short of miraculous. I wish I’d had this done years earlier — it would have made life in the C-3PO suit so much easier.’