By welshslider September 16, 2011
A giant lightsabre beams over London, Stormtroopers parade across New York's streets and Darth Vader is seen hailing a taxi.
It can mean only one thing - Star Wars is in town. 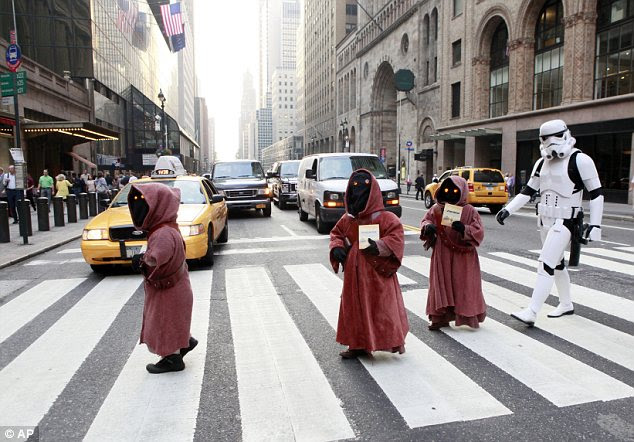 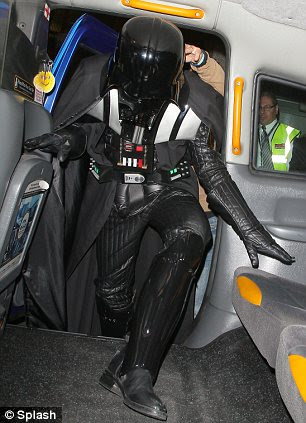 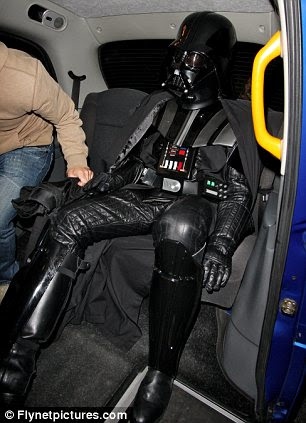 May the fare be with you: Darth Vader gets into a cab after the London launch party for Stars Wars on Blu-Ray

Momentum has been gathering this week as Star Wars fans prepare themselves for the release of George Lucas' groundbreaking six-film saga in Blu-Ray for the first time.
Each of the movies have been extensively remastered for the high definition format, with 'Star Wars: The Complete Saga' hitting the streets today.
To mark the box set's launch, London's BT Tower fired a high-powered blue Jedi 'lightsabre' into the sky last night - in a move that looked set to annoy Lord Vader.

The high-powered beam, installed by engineers for one (Jedi) night only, mimicked the blue lightsabre energy sword wielded by Luke Skywalker in the first Star Wars film.
More than sixty 4,500W lights, standing 1.3m high and weighing 124kg, all combined to produce a solid beam of light that was visible all across the capital.
And in New York, three Jawas and a Stormtrooper were seen stopping traffic by crossing 42nd Street in another promotional stunt. 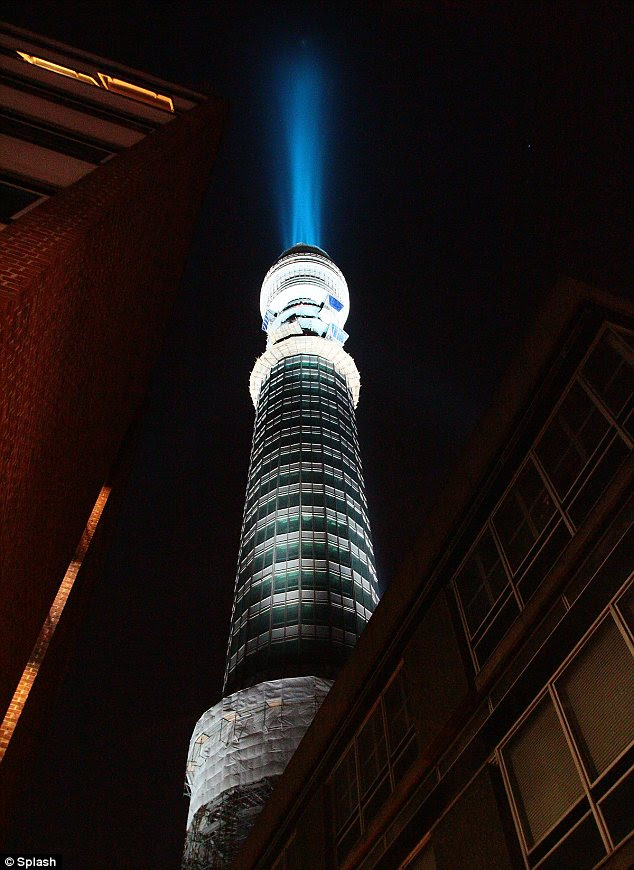 Burning bright: A giant lightsabre projected out of London's BT Tower to promote the launch of the Star Wars box set on Blu-Ray 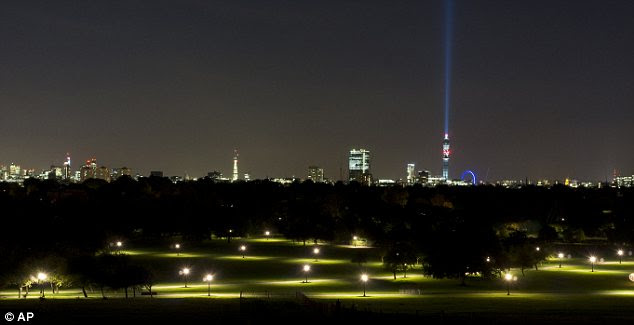 May the London light be with you: The BT Tower seen from Primrose Hill Park 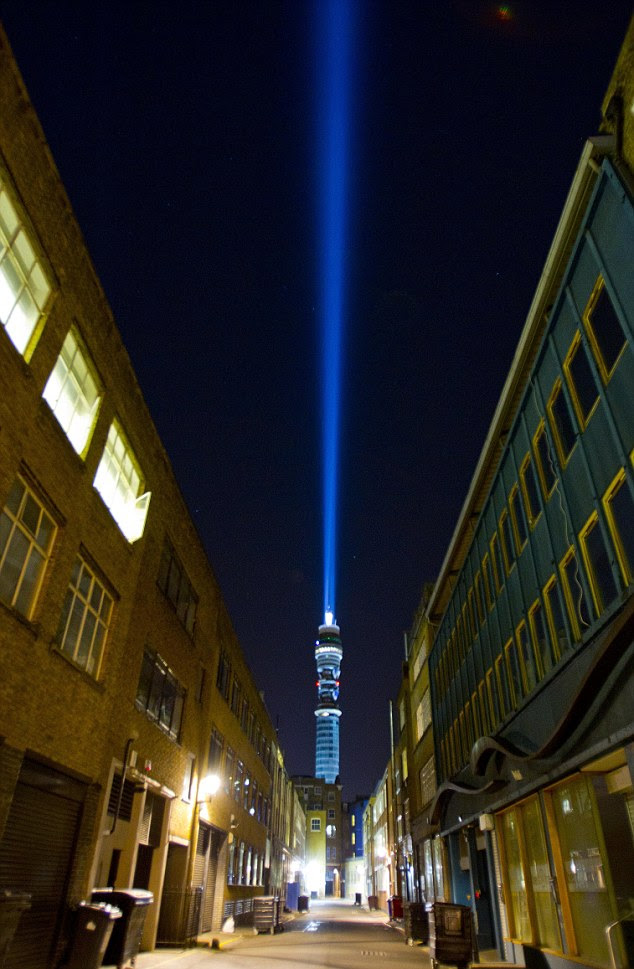 Sixty 4,500kw lights turn the BT tower into a 'lightsaber' beaming a ray of blue light, meant to represent the Jedi weapon from the films
It's perhaps a good thing Lucasfilm are going to all this effort, as there have already been multiple special editions, revised versions and box sets on both DVD and VHS.
Not only that, but 3D versions are due shortly at the cinema - and presumably 3D Blu-Rays will follow all too soon after that.
The shaft of light only shone 200m into the air, so it was unlikely to attract the attention of passing aliens such as Darth Vader's Imperial fleet. In fact, it was so low that it wouldn't even be able to summon Batman. 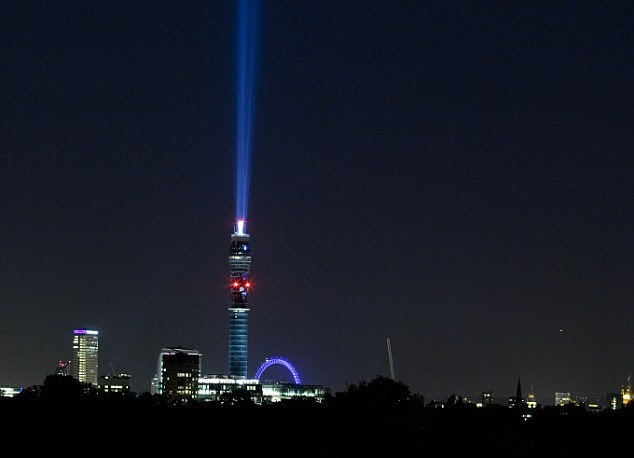 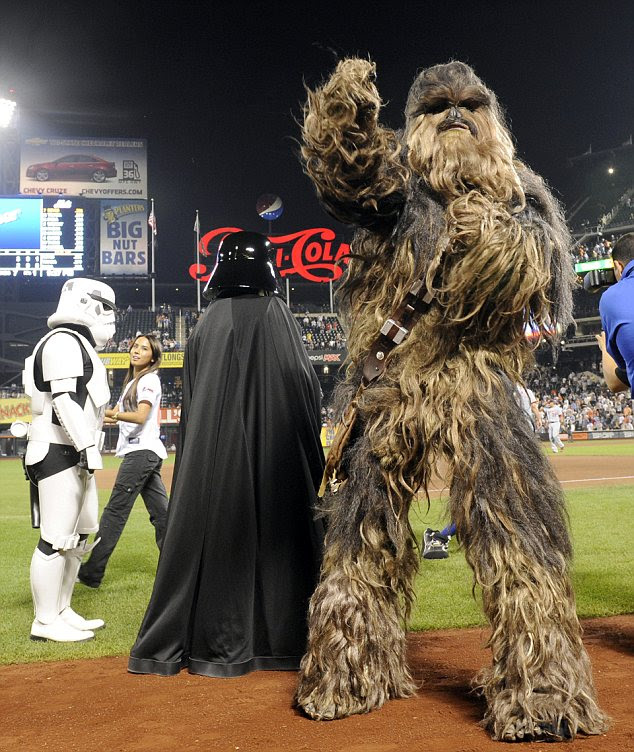 George Lucas has arranged promotional events throughout the world including this appearance of Chewbacca, Darth Vader and a lonely Stormtrooper at a baseball game in New York
The lights were switched on by actor Anthony Daniels, who played C3-P0 in the films.
Plenty of other out-of-work actors and geeky fans dressed up as their favourite characters such as Chewbacca and Stormtroopers in attendance too.
Earlier this week, Darth Vader and a force of Stormtroopers marched through central London to 'face off' against the changing of the guard. No casualties were reported. 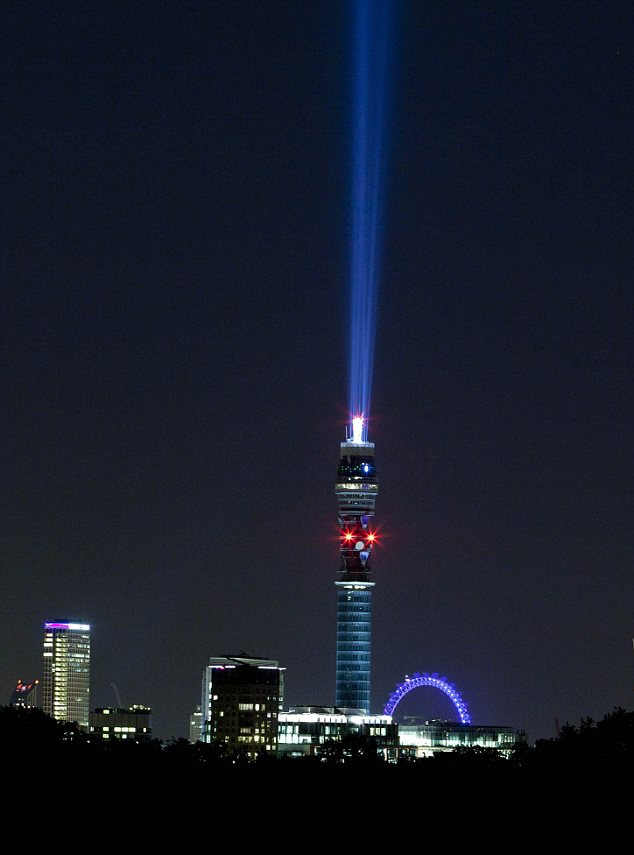