By welshslider July 29, 2011
His master Darth Vader may have turned to the Dark Side, but one Stormtrooper has become a Force for Good, walking across Australia for charity.
Paul Jacob French, from Melbourne, Victoria, is pictured on day five of his 2,500 mile (4,000km) journey from Perth to Sydney walking down Old Mandurah Road near Perth on Friday.
French aims to walk up to 25 miles a day, five days a week, in full Stormtrooper armour until he reaches Sydney.
He is walking to raise money for the Starlight Foundation - an organisation that aims to brighten the lives of ill and hospitalised children in Australia. His target is A$50,000. 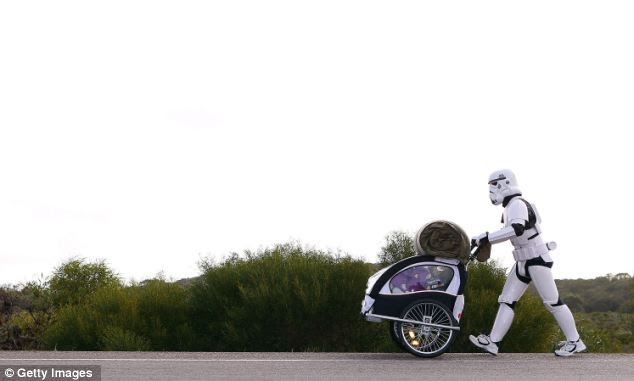 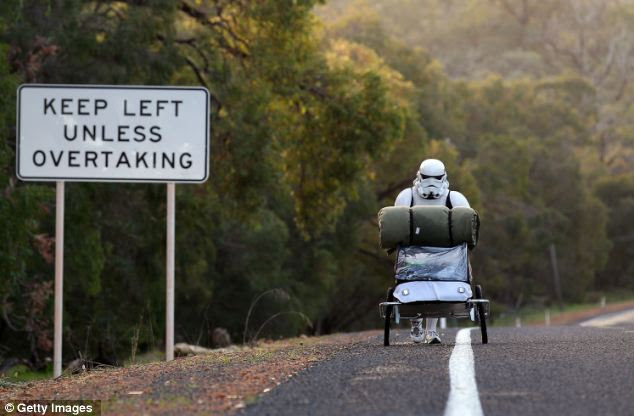 Hard shoulder: Paul French pushes all a Stormtrooper's worldly belongings with him as marches uphill away from Perth, Western Australia 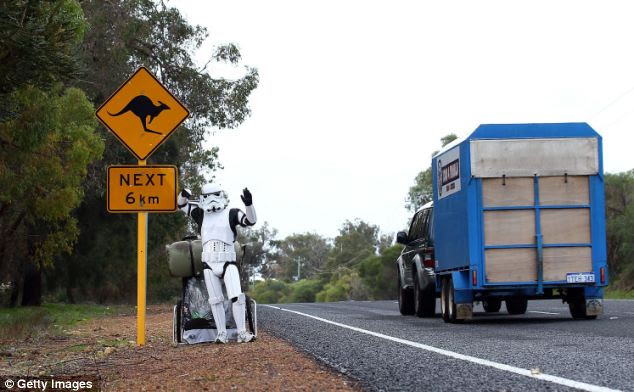 Friendly natives: Kangaroos are just one of the hazards Paul will have to contend with. He also has to cross the 700-mile wide Nullarbor Plain

French will probably get to Sydney around Christmas. No one except Paul knows why he chose the Stormtrooper outfit but it's definitely an attention grabber - and it avoids the need for sunscreen.
On the way he will cross the Nullarbor Plain, an 850-mile wide sheet of limestone which is lucky to ever see rain. it nearly killed the first Europeans to attempt it, but the crossing is now a rite of passage for young Australians - they can even collect an 'I crossed the Nullarbor' sticker on the way.
Over the course of the trek he will cross four states pushing his lightweight buggy with supplies.

Paul is a member of the worldwide 501st Legion, a volunteer organisation that wears Star Wars outfits for related events and as a means to contribute to their local communities through charity work.
He says his involvement with the 501st has been a 'fantastic' experience. 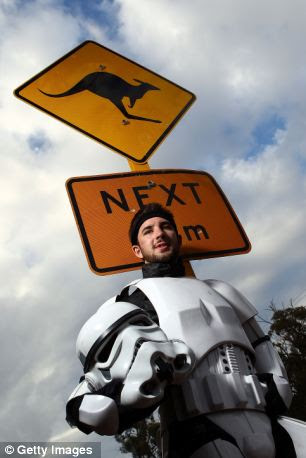 Unmasked: Rest break: Paul French takes a rest break at the end of his first week of walking 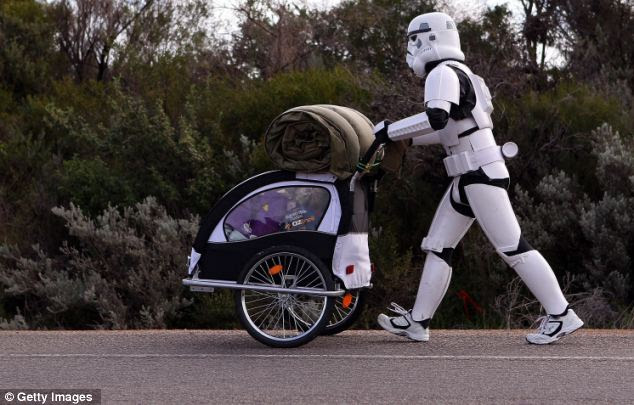 Using the Force: French is walking to raise money for the Starlight Foundation - an organisation that aims to brighten the lives of sick children in Australia
He said: 'In October 2010 I participated in the RunMelb half marathon in my Stormtrooper suit.
'The suit was restrictive and got quite hot while I was running, but the seed was planted for the Troopertrek idea.
'Since the marathon I have started to train regularly for this event and have acquired a much lighter and flexible set of armour that will be trimmed for better movement.
'I am hoping that by choosing to wear Stormtrooper armour I will be able to gather more attention for the cause I am running for and have a bit of a laugh along the way.'
He added: 'If there are any social events along the route that you think might benefit from having a Stormtrooper attend, let me know!' 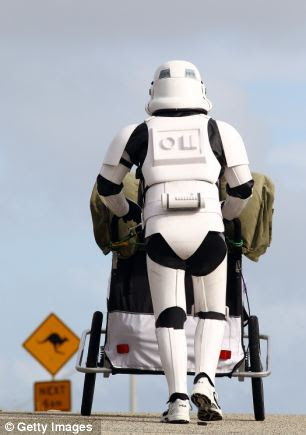 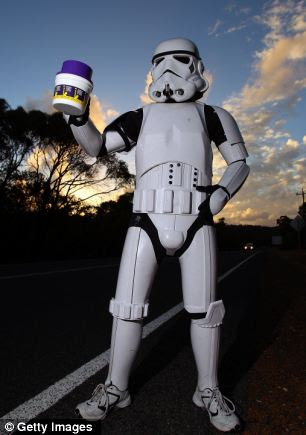 On his way: Paul pushes the wagon on and, right, shakes the collection tin for the Starlight Foundation