By welshslider May 22, 2011
They're calling this the Empire Strikes Back bike, but at first glance it totally looks like the Pee-wee Herman bike from Pee-wee's Big Adventure, right? Nevertheless this is way cool -- it was created at Skywalker Ranch using one of the bikes they had lying around in honor of Bike to Work Day, which was apparently yesterday (did you know? did you bike?). It's a pretty badass super-cruiser that contains all sorts of geeky Star Wars nuggets. Here's a description from StarWars.com ... "Literally created in a residential garage, the frame, wheels, and crank were acquired directly from an official Skywalker Ranch staff bike. From there it was a matter of accessorizing the bare-bones frame and wheels with pieces found on eBay to give it an Empire spin: fenders, chain guard and skirt guards came from various 1940s cruisers, including a J.C. Higgins Colorflow and Monark cruiser; the springer forks were pulled from a 1960s Sears Spaceliner; the tank combined a '60s Roadmaster body with a Hasbro AT-AT head rigged to "fire" its reciprocating chin guns with lights and sound; Master Replicas FX lightsabers were gutted and re-worked to become the headlight (Luke's) and taillight (Vader's) with lights and sound activated by switches on the lightsaber handgrips; the luggage rack was a modified 1982 Kenner Rebel Transport toy, now with swing-back rear to stow gear; a Hasbro Titanium Series Slave I worked nicely as a fender ornament; finally, the chrome Vader handlebar topper was lopped off a giant PEZ dispenser, having the added bonus of built-in light-up eyes, music and dialog from the films. Chrome tail, leather streamers, and torpedo pedals were added for flair." Unfortunately they're not selling this bad boy, but you can scope out some detailed pics over at StarWars.com and build your own at home. 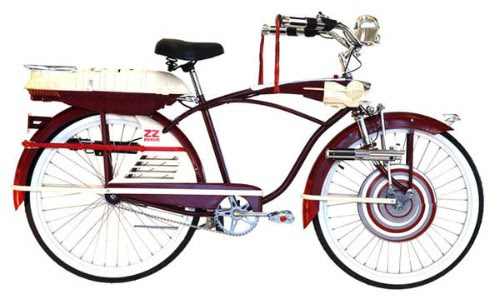