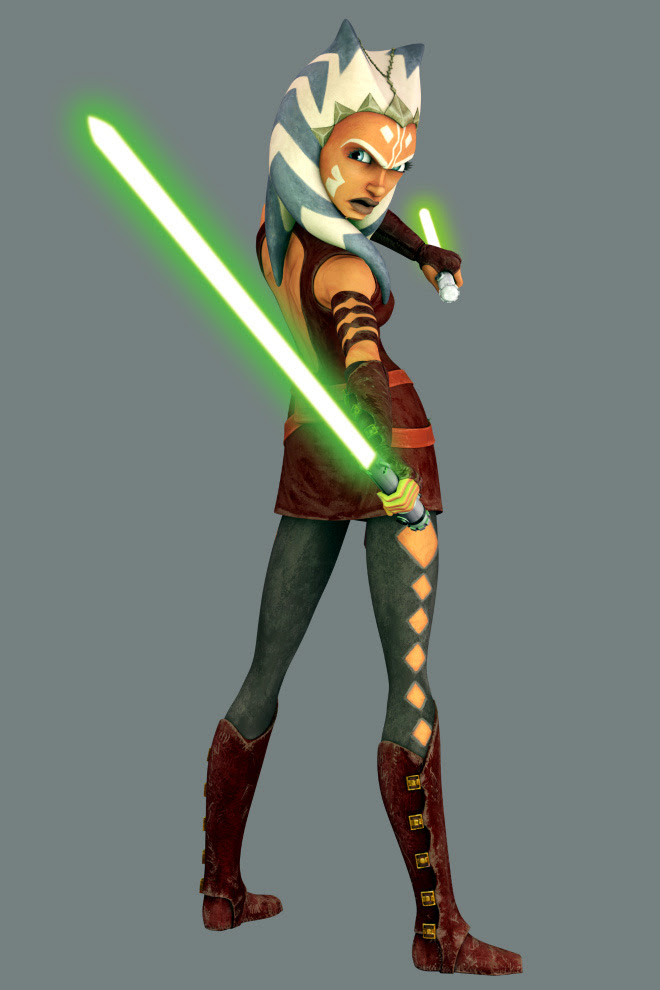 Say goodbye to the tube top, Ahsoka.
Ahsoka Tano’s costume change, viewable in the exclusive first-look image above, debuts Friday in The Clone Wars‘ new episode, “Heroes on Both Sides,” according to a Lucasfilm representative.
The wardrobe upgrade is overdue: Nearly two years ago, Wired.com complained about Ahsoka’s tube-top-and-miniskirt costume, which was strangely revealing in light of the fact that most Jedis rock full-length robes, even on the desert hell of Tattooine.
The Clone Wars‘ supervising director Dave Filoni said Ahsoka’s new, improved look has nothing to do with fallout from her near-nakedness. (A Lucasfilm publicist denies that the company has received any complaints about Ahsoka’s skimpy costume other than ours).
Instead, the female warrior’s endless battles with dim-witted robots, calculating bounty hunters and Sith killers drove her to wear more clothes and hew closer to Star Wars continuity, according to Filoni. She’s also getting a weapons boost, boasting two green lightsabers rather than one. 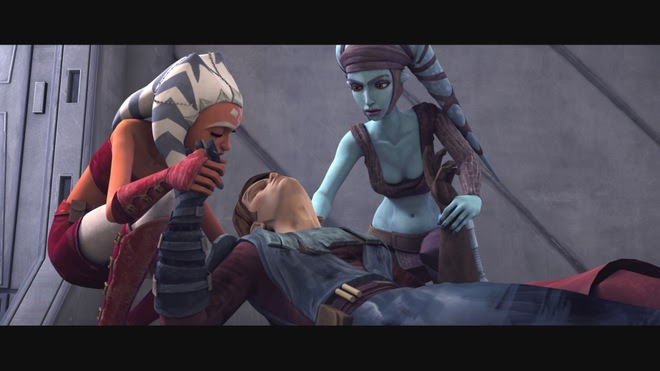 While The Clone Wars‘ male Jedis wear floor-length robes, its woman warriors like Ahsoka Tano (left) and Aayla Secura (right) have had much more skin in Star Wars‘ sci-fi game.
Images courtesy Lucasfilm
“Over the course of the series so far, our characters have been affected by the conflict, so the changes we are seeing are a reflection of what they’ve gone through and how they’ve changed,” Filoni told Wired.com. “We’re getting closer to the events of Episode III, and the look of the series is moving toward that look and those designs.”
Ahsoka’s not alone in her transformation, according to a Lucasfilm representative who said other primary Clone Wars characters, like Anakin and Obi-Wan, are also in line for costume changes.
Filoni said that’s at least partly because of improved animation techniques, which have boosted productivity while generating character models he called “much more expressive.”
“As a weekly series, we’ve been pushing ourselves to do things that haven’t been done in TV animation, and it’s always a struggle just to get it done at all,” Filoni said. “But we are learning tricks that help to streamline the process, and we continue to build our asset library. We’re at a place where we can explore and develop new and improved character assets for some of our primary players.”
Whatever the reason, it’s good to see Ahsoka dressed more appropriately. In a limitless Star Wars universe dominated by males maneuvering for political and military primacy, it’s good to see that the few females in The Clone Wars are serving a higher function than eye candy for salivating fanboys.