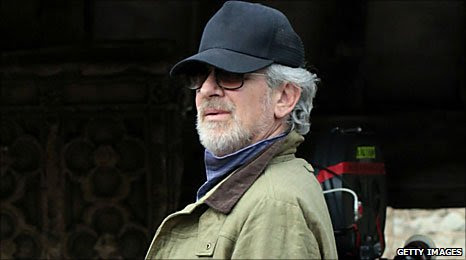 Steven Spielberg pictured during filming of War Horse
Legendary Hollywood director Steven Spielberg has spoken of the "abundance of natural beauty" he enjoyed while filming scenes for his latest movie on Dartmoor recently.
Spielberg spent a number of weeks in the Sheepstor area of Dartmoor while filming War Horse.
And, in a letter to a local newspaper, he has thanked the patience of residents during the shoot.
He said the "support of the local community was critical".
The letter to the Plymouth Evening Herald was sent out by production company, Afterworks Ltd.
In it, the Jaws, Jurassic Park and ET director says: "I have never before, in my long and eclectic career, been gifted with such an abundance of natural beauty as I experienced filming War Horse on Dartmoor.
"And, with two-and-a-half weeks of extensive coverage of landscapes and skies, I hardly scratched the surface of the visual opportunities that were offered to me."
The letter continues: "We have had an incredibly successful shoot and every member of our substantial crew has commented on what a great experience the shoot in Dartmoor has been.
"We faced many logistical challenges working in the narrow lanes and villages on Dartmoor with our extensive film unit.
"The patience and support of the local community was critical in allowing us to safely and quickly move from place to place in search of the best shots and the best light to shoot them.
"We wanted to thank all the residents of Sheepstor and Meavy and the surrounding communities on Dartmoor for their support throughout our stay in Devon, without their help co-operation and patience we would not have been able to achieve so much in such a short space of time."
War Horse, being released by Dreamworks Studios, is based on the book by Devon-based children's author Michael Morpurgo.
Published in 1982, it is the story of Devon farm horse, Joey, who is sent to France at the outbreak of WWI.
It is currently enjoying great success on the London stage and will soon be transferring to Broadway.