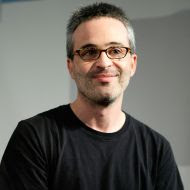 http://nymag.com/daily/entertainment/2010/08/alex_kurtzman_steven_spielberg.html
Boy, when Steven Spielberg says he likes you, he really puts his money where his mouth is. Just three days after hearing that DreamWorks TV would be teaming with screenwriters-of-the-moment Alex Kurtzman and Bob Orci (Transformers, Fringe, Star Trek) to produce Locke & Key for TV, Vulture has learned that DreamWorks will give Kurtzman his first big-screen directing job. The film is Welcome to People, an intimate dramatic script with no aliens at all that he co-wrote with Orci and Jody Lambert, the documentarian who made the 2008 documentary Of All the Things.
Welcome to People tells the story of a struggling twentysomething man who, after flying home to L.A. for the funeral of his estranged record-producer father, discovers that the will stipulates that he must deliver $150,000 in cash to a 30-year-old alcoholic sister he never knew existed, and her troubled 12-year-old son. Determined to keep the money to solve his own problems, he's nonetheless fascinated by his unknown kin and makes contact with the two without revealing who he really is.

Insiders tell us that that the script was written six years ago, but Kurtzman pulled it out of his drawer when he was starting to be offered the kinds of big-budget movies he and Orci have made their names writing. Not wanting to be labeled "only" an action director, Kurtzman made his case to direct Welcome to People — and found Spielberg and his studio receptive.

No word on cast yet, but one is expected to coalesce quickly. It's a hot script precisely because all three of its main characters — brother, illegitimate daughter, nephew — are such meaty roles: The title Welcome to People refers to a child anger-management program in which the nephew is enrolled after blowing up his middle school's pool with a sodium chunk stolen from chemistry class; the grown son is a damaged goods broker — a fitting metaphor for his emotionally crippled relationship with his father; and the illegitimate daughter is an alcoholic who tends bar at The Standard Hotel on Sunset Blvd. And none of them fires a single laser.