By welshslider August 29, 2010
It's a sight Star Wars fans are used to seeing - creator George Lucas with a lightsaber promoting his famous film franchise.
But what made yesterday's event slightly different was that also in the picture were a range of Star Wars-inspired Disney characters, including Jedi Mickey, Princess Leia-Minnie and Darth Goofy.
Lucas, 66, posed alongside the characters at Florida's Walt Disney World to promote the Last Tour To Endor fan event, a celebration of the last year of the original Star Wars' ride Star Tours running before the new ride is unveiled in 2011. 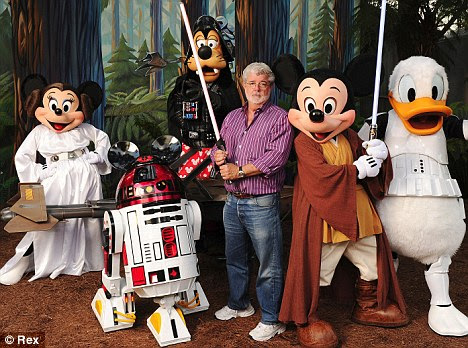 May the force be with you: George Lucas poses with Star Wars-inspired Disney characters including Jedi Mickey and Darth Goofy at Walt Disney World in Florida
The event saw fans make the most of the theme park after hours with a party which lasted until 1am and included a Star Wars fireworks show, and was attended by celebrities including Seth Green and original C-3PO actor Anthony Daniels.
Last Tour to Endor was held as part of the Star Wars Celebration V event - marking the 30th anniversary of Star Wars: Episode V - The Empire Strikes Back.
And Lucas also delighted fans by announcing that all six Star Wars films - the original trilogy of episodes IV, V and VI, and the prequel trilogy of episodes I, II, and III - will be released in a Blu-ray boxed set next year. 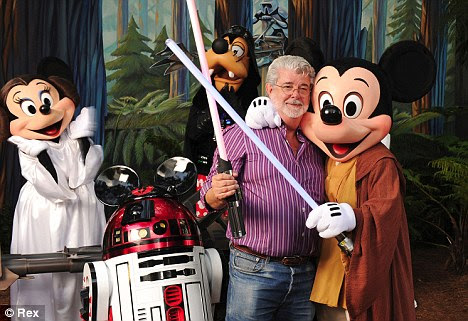 Hugs all round: Star Wars creator Lucas smiles as he gets a hug off Jedi Mickey 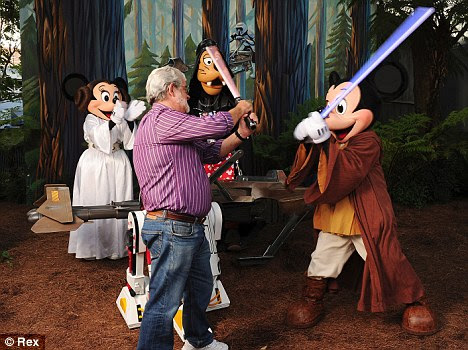 Fight scene: Lucas and Jedi Mickey have a lightsaber fight scene at the fan event
He said: 'Blu-ray is the absolute best way to experience Star Wars at home - in pristine high definition. The films have never looked or sounded better.'
The director also said that the new box set will feature extensive bonus material and will even include deleted scenes from the original film trilogy.