By welshslider August 22, 2010
Spielberg Spotted In Shop - Shocker.  Its not a slow news day, after the excitement of Star Wars on Blu-Ray we thought it was time to bring it down a bit.  So heres a story about Steven Spielberg walking into a shop. 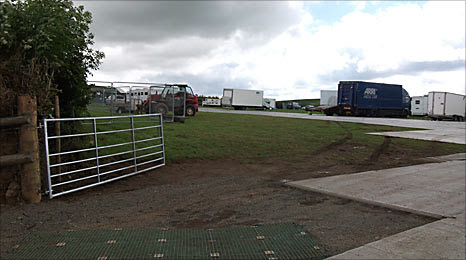 Something's going on...
You know those special blue plaques they put up on buildings to commemorate the place where a globally significant person once lived, or stayed or had an earth shatteringly profound thought?
I wonder if an unassuming, single-storey branch of the Co-op in a damp Dartmoor village will qualify in years to come?
Why? What would it say? How about: "Hollywood super director Steven Spielberg bought a pint of semi-skimmed milk here in August 2010".
Yes, it's alleged that till staff at the little convenience store had a close encounter of the very famous kind with the man behind screen classic such as, Jaws, ET and now First World War weepie, War Horse.
Michael Morpurgo talks to BBC Devon about War Horse
David Vernon - a local dad of two little girls - lives just down the road from the aforementioned celeb hang-out.
"I saw Steven Spielberg walking towards the Co-op," he said.
Imagine, he'd just taken the kids for breakfast at the local cafe when a man in a baseball hat with a beard caught his eye.
"He didn't look familiar to the area, he looked like he was going to buy the Co-op rather than buy a sandwich.
"It's a bit of excitement for all of us at the moment - the shops, the cafes, the pubs with the crew coming in."
Well, David was a real find, most people I spoke to on my hunt for Steve said I should have come a couple of days ago.
I drove around the narrow single-track lanes looking for clues that could lead me to the great man and his crew.
Then, on a windswept hillside, I spotted the War Horse base camp.
Trucks of props and lighting and the kind of kit you need to make a Hollywood blockbuster were lined up in a farmer's field - all guarded by two beefy, grim-faced security guards in fluorescent jackets.
I snuck up on them feeling very naughty - like paparazzi.
They denied all knowledge. I knew different. As I started to leave a mum and two excited little red-haired girls rolled up in a muddy car asking if this was War Horse base camp.
They were clearly horse-mad.
They'd come over the Tamar from Harrowbarrow hoping for a brush with Hollywood greatness.
"We even went to the New Forest and saw the Devil's Horsemen being filmed."
They took a couple of photos and went home happy-ish.
I went on looking for clues. Big green squidgy pads were dotted on verges and in fields. The crew use them to protect the moor from damage when they park their heavy trucks close to the set so the land isn't damaged.
I soon happened upon a couple of walkers in their 60s.
They turned out to be like a walking, slightly damp and crumpled Heat magazine in an anorak.
They could barely contain their glee: "We've been speaking to the location director from California.
"He told us how they'd used a helicopter and that War Horse started out as a play and a book and Steven was so impressed he wanted to make a movie.
"They were auditioning a thousand people in the next town the other day as extras, it's so exciting."
Ok, so I didn't get to meet Steve but the Hollywood stardust sprinkled on this little bit of Dartmoor's rubbed off on an awful lot of people.
But rumour is the big man and his crew are returning to the county in September - I still might get my chance!