Lucas and Spielberg on Norman Rockwell

By welshslider July 15, 2010
He was the quintessential American artist of his generation, creating scenes that captured turning points in life . . . and dreams of what lies ahead.

They are the quintessential American filmmakers of their generation, creating scenes that capture turning points in life . . . and dreams of what lies ahead.

Still, you might be surprised to learn that Norman Rockwell's work had a profound influence on Steven Spielberg and George Lucas, starting when they were boys, inspired by his covers on the Saturday Evening Post.

"He was able to sum up the story and make you want to read the story," said Lucas, "but actually understand who the people were, what their motives were, everything in one little frame."

It was Lucas who started collecting Rockwell.

His friend and colleague, director Steven Spielberg, said he couldn't believe that somebody he knew had "a living, breathing oil painting by the hand of this great American icon. It was amazing."

"So you decided to get some, too?" asked Braver.

"Well, well yeah; I copied this guy and got a Rockwell," Spielberg laughed, adding, "I went out and I got a bigger Rockwell!"

The first exhibit of the works they own just opened at the Smithsonian American Art Museum in Washington.

Gallery and Extended Interview With Lucas and Spielberg

On a tour of the exhibit Lucas remarked that he'd never seen all the pictures all in one place.

There's “Shadow Artist,” which usually hangs in Lucas's office: "It's the entertainer, using light and motion," he said, "which is where our industry started." 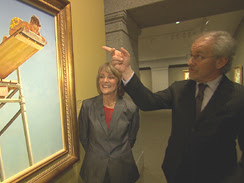 (CBS)
"Boy on a High Dive” is usually in Spielberg's office.

When asked if it were his favorite Rockwell painting, Spielberg said, "Well, let's put it this way: This is the Rockwell that, every time I'm ready to make a movie, every time I'm ready to commit to direct a movie, that's me - that's the feeling in my gut, before I say 'yes' to a picture. Because every movie is like looking off a three-meter diving board, every one."

Curator Virginia Mecklenberg, who was "thrilled" with the quality of the collections the two filmmakers had amassed, points out that Rockwell himself was fascinated with the movies, spending time in Hollywood where he captured Gary Cooper on location for “The Texan."

"He was just fascinated with the idea of the, quote, cowboy, being made up by the tough-talking Hollywood makeup man?" Braver asked.

"Well, he's reversing roles here," Mecklenberg said. "The makeup man's chomping on a cigar but he's also putting on the makeup and he's got this cloth on his lap, that's smeared with rouge and lipstick. And Cooper is . . . he's beautiful."

And Rockwell, famous for his sense of humor, might be tickled to see that one of the macho guys he painted in 1935 bears a striking resemblance to Indiana Jones, in the 1981 Lucas-Spielberg collaboration, "Raiders of the Lost Ark."

The 1941 Rockwell painting called "The Flirts” could be a prelude to Lucas' "American Graffiti," released 32 years later.

Spielberg actually paid homage to one of Rockwell's most famous images, "Freedom From Fear," in his 1987 film, "Empire of the Sun."

"I actually had the magazine open to that picture when they were putting the young boy Jim to bed, before everything falls apart in World War II," he said.

In fact, in a 1959 "Person to Person" interview, CBS Newsman Edward R. Murrow asked Rockwell about the enduring popularity of those images.

"Do you have any idea of how many copies have been made of those paintings?" Murrow asked.

"I don't really know, I know it runs in the millions and millions," Rockwell replied.

But many of Rockwell's fans had no idea that he composed each one of his works the way a film director sets up a shot . . . picking out the props, organizing the lighting. "He even auditioned his models," said Mecklenberg, "to make sure that they would act out the roles that he expected them to play in his pictures." 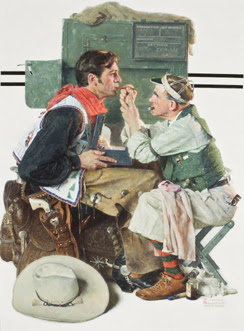 (© 1930 SEPS: Curtis Publishing.)
There's ample evidence of that at the Norman Rockwell Museum in Stockbridge, Mass. Along with Rockwell's studio (preserved as he left it), and walls of his Saturday Evening Post covers, there are also thousands of photographs from which Rockwell sketched and painted.

(Left: "Gary Cooper as the Texan," 1930, from the collection of Steven Spielberg.)

She was 9 years old when Rockwell asked her to pose for “A Day in the Life of a Girl.”

Sot "I loved the idea of being told a story and then being a part of it," she said.

She appeared on three Saturday Evening Post covers, including "Girl With a Black Eye."

Rockwell worked hard to get the girl's grin: "And he gets down on his hands and knees and he starts banging the floor and doing all these antics to make me laugh," Leonard recalled. "And eventually I do it!"

Of course, Steven Spielberg is also famed for directing kids . . .

"I've often admired Rockwell for how tough it is sometimes to get kids to be natural," Spielberg said.

And like Spielberg and Lucas, Rockwell was never afraid to send a moral message . . .

"I think he's left a legacy that'll never be forgotten," said Lucas. "You know, so many artists have a tendency to paint without emotion, without any connection to the audience. And both Steve and I are die-hard emotionalists, and we love to connect with the audience."

"He had a tremendous respect for the virtues of mankind," said Spielberg, "and there was a real sense of community, of family, and especially of nation."

A vision of the American spirit . . . for this Fourth of July