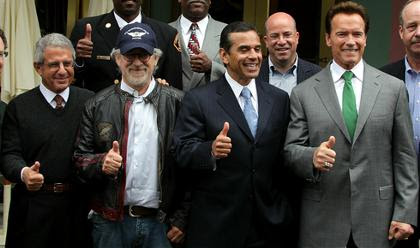 (L-R) Ron Meyer, President/COO, Universal Studios, director Steven Spielberg, Los Angeles Mayor Antonio Villaraigosa, Jeff Zucker, President/CEO, NBC Universal and California Gov. Arnold Schwarzenegger give a thumbs up during reopening of Univesrsal Studios' backlot on May 27, 2010 in Universal City, California.
By Frederick M. Brown, Getty Images
It was thumbs up from Hollywood heavyweights Universal honcho Ron Meyer, Steven Spielberg, Los Angeles Mayor Antonio Villaraigosa, NBC chief Jeff Zucker, and California Gov. Arnold Schwarzenegger during the reopening of Univesrsal Studios' backlot yesterday. The lot was destroyed by fire two years ago. Unveiled yesterday were sets recreating 13 blocks of city streets covering 15 shooting areas over four acres. "What you see around you is New York and anywhere else your imagination takes you," said Spielberg, who helped design the new lot. It was rebuilt at a cost of $200 million, the largest set construction in Hollywood history, according to Universal.