LOS ANGELES, California (CNN) -- George Lucas didn't get to be a billionaire by delegating. 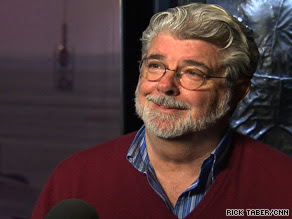 George Lucas says he was "completely surprised" by "Star Wars in Concert."

Holding fast to his vision -- and his marketing rights -- for the "Star Wars" empire has made it the biggest franchise in history, and made Lucas one of the most powerful people in entertainment.

But while he's enthusiastic about the new touring show "Star Wars In Concert," it wasn't his idea, and when I talked with him before the first Los Angeles performance this week, he kept giving the credit to others.

"Star Wars In Concert" is built around John Williams' well-known scores from the films, performed by a symphony orchestra and choir, and accompanied by specially edited clips from all six movies, displayed on a mammoth LED screen.

Watch Lucas rave about the show »

Anthony Daniels, who has played and voiced the golden protocol droid "C3PO" in every film and most of the spinoffs, provides live narration -- and another reason for the "Star Wars" fans in the audience, especially those waving lightsabers and dressed as everything from sand people to Imperial stormtroopers, to cheer mightily, as they did the night I interviewed Lucas. iReporter praises the 'Force' of the show

George Lucas: I've seen some presentations of, you know, live orchestras with "Star Wars" clips, and that sort of thing. But this is so much more than that -- it's so much more emotional, because what they've done is taken the emotional content of the score ... one is obviously the Imperial March, one is obviously romantic ... and then they've cut all the pictures around that from all the movies, so that you get this really wide range of visuals going with the music, and it really is quite powerful when you see the depictions of all of the various Imperial shenanigans that were going on over the Imperial March.

CNN: Obviously, when John Williams did the music for the original film, neither of you could have guessed your association would last so long, or that you'd be so identified with each other. How did he get involved originally?

Lucas: What I did was, I was doing this space opera, and I was talking to Steve Spielberg and I said, "Look, I've got to get somebody who really knows the old-fashioned music score, I really am doing some giant romantic action adventure, you know, throwback to the '30s, and who do you know that can do that?" And he said, "Oh, there's only one person who can do that and that's John Williams -- he did 'Jaws' and he's perfect."

And I said OK, and I met him, and we hit it off, you know, perfectly, and doing the first film was such a great experience -- he's so wonderful to work with -- that, you know, I'll never let him go. And Steve won't let him go either!

CNN: How did this show come together?

Lucas: Howard! [Lucas calls over Howard Roffman, the president of Lucas Licensing.] You're the man who did the whole thing -- I've got nothing to do with it. ... We would kid him about how his concert was going and he had to get Johnny [Williams] to buy in and me to buy in.