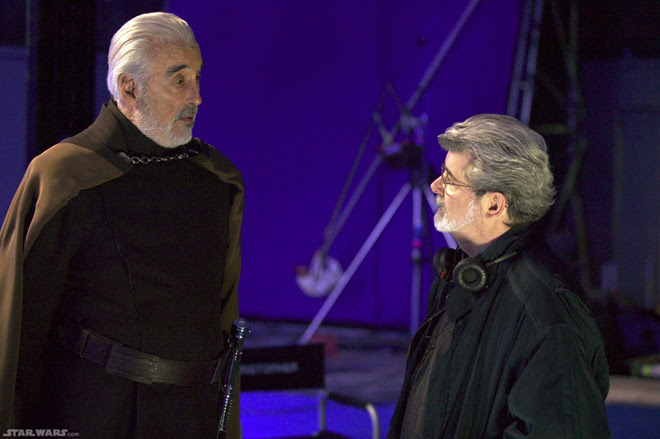 George Lucas wonders if he'll ever be a real knight as he stares up at Sir Christopher Lee.

The iconic actor known eternally as a vampire and a fallen Jedi Knight is now a real life knight of sorts, as Queen Elizabeth II granted Christopher Lee the title of Sir.

Lee can lay claim to the unofficial additional title of King of All Nerd Franchises. In addition to his several battles with Peter Cushing in Hammer Films’ Dracula movies, he was a Bond Villain (The Man with the Golden Gun), Fu Manchu in a bunch of movies, a Lord of the Rings baddie (Saruman), the eerie villain in The Wicker Man (the original) and Count Dooku in the Star Wars series. Along the way, he appeared on The Avengers, Space: 1999, multiple Tim Burton movies and more video games than you’ve had hot dinners.

In the end, he’s the epitome of a working British actor who’d take on anything.