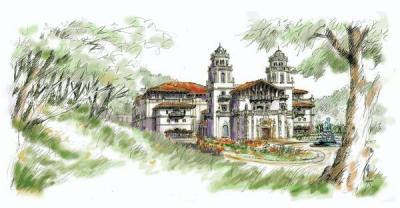 Filmmaker George Lucas is seeking permission to build a 262,728-square-foot building to house a digital film production studio and other amenities at the former Grady Ranch in Lucas Valley.

The proposed building would be built in the Mission style resembling St. Vincent's School for Boys, with two 85-foot-tall towers. It would include administration offices, a restaurant, a general store, a wine-tasting room, screening rooms, costume storage, dressing rooms, 19 guest suites and basement parking. The project calls for 223,770 cubic yards of excavation and the creation of a knoll for a vineyard.

In a letter to the county of Marin, Nona Dennis, president of the Marin Conservation League, wrote, "The Lucasfilm proposal continues to be massive in scale, requiring equally massive excavation. It will add an influx of daily traffic on Lucas Valley Road, and it presents an esthetic intrusion on the landscape." She was particularly disdainful of the towers.